House Speaker Nancy Pelosi (D-CA) may not be able to claim that title for much longer, Fox News reported, citing recent statements from Republican House leaders.

Though Democrats retained control of the House in Tuesday’s election, the margin was much slimmer than Democrat leaders hoped, raising questions about Pelosi’s ability to win re-election as Speaker.

Rep. Tom Emmer, (R-MN), chairman of the National Republican Congressional Committee, commented: “I mean Nancy Pelosi doesn’t even have a majority where she can be elected speaker again, whoever would have guessed that it’d be possible that Nancy Pelosi might not be the speaker?”

Democrats spent millions of dollars attempting to flip more Republican seats but instead managed to lose seats in Florida, Minnesota, and Oklahoma — shrinking their majority.

House Minority Leader Kevin McCarthy (D-CA) noted, “I know the vote on the floor is difficult for Speaker. I know there was a number of people who did not vote for her last time. And as our numbers continue to grow, I think at the end of the day, no matter where we end up, we’ll be able to have a very big say, or even run the floor when it comes to policy.”

Nancy Pelosi faced a difficult path to becoming Speaker in 2018, and her decision to stonewall on coronavirus relief has infuriated even her Democrat colleagues — setting her up for yet another close race for Speaker.

The House voice vote for speaker requires a majority.  Each Republican typically yells out the name of their party leader — in this case McCarthy — and Democrats announce their vote for Pelosi. With the numbers on their side, the party in power winning the vote is almost a foregone conclusion.

Pelosi has struck deals and maneuvered to squash internal challenges to her leadership before. She overcame defectors in the past, including those from moderate Democrats who had pledged to vote against her if elected. In 2019, there were 15 Democrats who didn’t support her, but she could afford the losses with a bigger majority.

No viable Democrat challenger has arisen as of yet, but with the focus on the drawn-out presidential election, attention has not yet been focused on the impending battle for House leadership.

Good Bye Nancy,
Time to get a Speaker who cares about the American People and the United States. Beside, San Francisco could use her undivided attention. I wish her the best.

I don’t she needs to be gone

Good bye Nancy. Glad to see you go and wish it had happened sooner.

Amen to that. She needs to be arrested for treason or sedition as a result of her attempt to remove the lawfully elected President Donald Trump, for her own political ends.

Jail is where she should be and let’s see if she can get her hair done there. But let’s pray a new speaker is a fair, reasonable, non-progressive, and a true American.

Get rid of her now.

If Pelosi is expelled from speakership, that’s a relief for America. This evil lady has been holding America hostage in her iron grip. God Bless America!

Pelosi needs to be EXPELLED from AMERICA.

A big reason that Republicans, etc do not want to vote Democrat is becAuse of Nancy Pelosi. She is disgusting, tearing up the state of the union address, etc etc etc. If the Democrats want to get back into the grace of those who vote against them, one big plus that help them would be to get rid of Nancy Pelosi. And after that, if possible, get rid of sneaky Schumer, Nasty Nadler and Shifty Schiff.

AGREE. GET RID OF ALLTHESE DEMO RATS NOW.NANCY PELOSI SHOULD HAVE BEEN ARRESTED WHEN SHE RIPPED UP PRESIDENT TRUMP STATE OF THE UNION SPEECH FOR TREASON.MAXIE WATERS SHOULD BE ARRESTED FOR DIVIDEING OUR COUNTRY.HER WORDS WERE SPIT ON THESE CONSERVATIVES THROW THEM OUT OF RESTURANTS,JAMES CLYBURN SAID IN HIS OWN WORD TO A REPORTED THAT ASK HIM WHAT DO YOU THINK OF OUR PRESIDENT TRUMP HE ANSWERED HANG HIM.CLYBURN SHOULD OF BEENARRESTED FOR TREASON. THATS YOUR DEMO RAT PARTY.SHIFF, SHUMER,NADLER NEED TO BE VOTED OUT ALSO.THERE ALL CORRUPT.

Getting rid of Pelosi would be a huge win for all Americans.

Just do not replace her with AOC or another member of the Squad.

Shumer and Pelosi should both be fired and arrested

She’s nothing but a troublemaker. Ding dong the witch is dead

The demonic-rats have turned our 3-tiered government into a 3-ring circus, with Pelosi and her supporters leading the way. To think, our Congress was once called “the greatest deliberative body in the world” Now look at it. Never reward a party for this kind of nonsense, or it will never go away. The out-of-power parties will just take turns trying to impeach the in-power party. Exactly what the founders warned against. But this generation of Americans did it anyway. Now we must all pay the price – which is chaos.

In all my years on this planet and being a military retiree, Not a fan of Demoncraps since the last real American Demoncrap that being President Kennedy, I have never seen such an awful Anti American Speaker such as Nancy. She needs to definitely be removed or our country will suffer more for her vengence towards the people she’s supposed to represent and help the country improve. Her entire term has been devoted to Anti Trump tactics. May she rot in hell.

Agree. She’s either a domestic terrorist or a gangster. Maybe both.

NO WAY NOW . PELOSI MUST NEVER GET THE LEADER OF THE HOUSE BACK AGAIN —— NOT AFTER THIS HAS BEEN UNCOVERED. WE CAN FIGHT BACK AND HELP TRUMP ANY WAY WE CAN.

It’s about time deport the witch to the moon .

Pelosi spends all of her working time drunk. It’s about time to get a responsible non-alcoholic speaker in place. If there is one.

Negative Nancy All Talk No Action , She Has Not Helped Americans , In The Last Year When They Need Help The Most. Just Talk $ Stalk.

My question is “How in the world are there so many ignorant people willing to give this freak of a woman so much power over them?”!! It amazes me that she has pulled so many disastrous stunts and the democrats just smile and say, “Isn’t she great?”! REALLY?!? How much does she get to rub their noses in her despicable power before they wake up???

I will not miss her one second… for her to go her to go…..bACK

She (Pelosi) was getting too big for her britches….

Good-Bye Fancy Nancy! That would be the best news for the entire year. The House’s gift to the country.

Most dimwits are more afraid of The Squad then they are of Piglosi.. They ALL need to go !!! Wicked Witch AND the Squad !!

Are we sure pelosi and her ed are American citizens, they sure do not act like it. Sentence them appropriately to community service supervisd by Republicans.

HOPEFULLY QUEEN NANCY IS BEING DEPOSED OF THE THRONE.MAYBE THERE WIIL BE PUNSHMENT FOR ALL THE KIDS STARVING & HAVE NO ROOF OVER THEIR HEADS.

Ding Dong the witch is dead and needs to get the H out ASAP!

Are we sure pelosi and her puppets are American citizens, they sure do not act like it. Sentence them appropriately to community service supervisd by Republicans.

Yeappers, she should have been more careful with her loose lips, now the ship is sunken
Not to top it all, with the hairdresser fiasco and LYING about it
Never sucked up to her responsibilities at any angle
Better take those designer curtains with you, Pelosi on the way out with the door shutting hoping you won’t get booty kick if you’re not out fast enough

Pelosi is and has been the most vile person or living thing in our democracy. She will meet her maker one day and will pay for all her wicked ways.

She should have been gone a long time ago. Never seen a person would tear up documentation in front of ever one. She sure been fired then. I think our country need some one that loves our country.

kevin is a republican: idiot

You should go with her

Just think people. If Biden gets in as President, the Democrats will eventually say he is not mentally capable of being the President and Harris will become the President. Now that alone could may one sick at the stomach, but if something would happen to Harris, Pelosi would be in line. Now, that’s really is a sickening thought. Yes, Pelosi needs to be gone, because she is in Soros’s back pocket, no doubt about it. With his corruption on top of her corruption, that would make for a “yes we can put the US under”. It might happen anyway with Biden and Harris in office. We really have a big mess in the U.S. Thank God, the Senate is more Republican.

Did everyone in the House forget Pelosi’s promise? She said if you would allow her to stay one more term, she’d retire. But she lied, as always. Now she’s trying to run again. Make the slug of a woman stick to her promise. We want her gone. She’s the reason the Dems may lose. Get rid of her.

I am all for her being gone but who would take her place? If it was one of the so called squad we would be even worse off!!!!!!

I hope you leave. You’re spiteful and vindictive. Not many like you. Sure as HELL won’t miss you Vicky

Shame on you Nancy!!! So many people hate you!! Time to retire Nancy! Don’t you have grandchildren that need your attention my God really. Or a husband that would love to travel the world with. Step down Nancy Lots of people think your a loser. Love from the majority of Americans that you have Withheld covid relief from!!!!!!

I DID AWHILE BACK !

Bye Nancy. Whatever you do, don’t fall down and break a hip. That would be a real shame.

WHEN THEY ARE THROUGH WITH ALL THE VOTER FRAUD PELOSI MAY BE TOTALLY OUT OF A JOB! PEOPLE HAVE FOUND POLLSTERS STILL PICKING UP BALLOTS IN CALIFORNIA AS LATE AS 11/5/2020 AMD YET THEY HAVE CALLED ALL THE RACES! REMEMBER 2018 AND I HEAR ONCE THEY ARE THROUGH FINDING FRAUD IN PRESIDENTIAL RACES THEY WILL BE LOOKING AT THE STATES. WE KNOW FRAUD BEING PERPETRATED IN CALIFORNIA FOR YEARS,

My Build Back Better Act is a direct answer to the challenge of higher prices. But don’t take it...

America is on the move once again. https://t.co/FpGniBgGrf 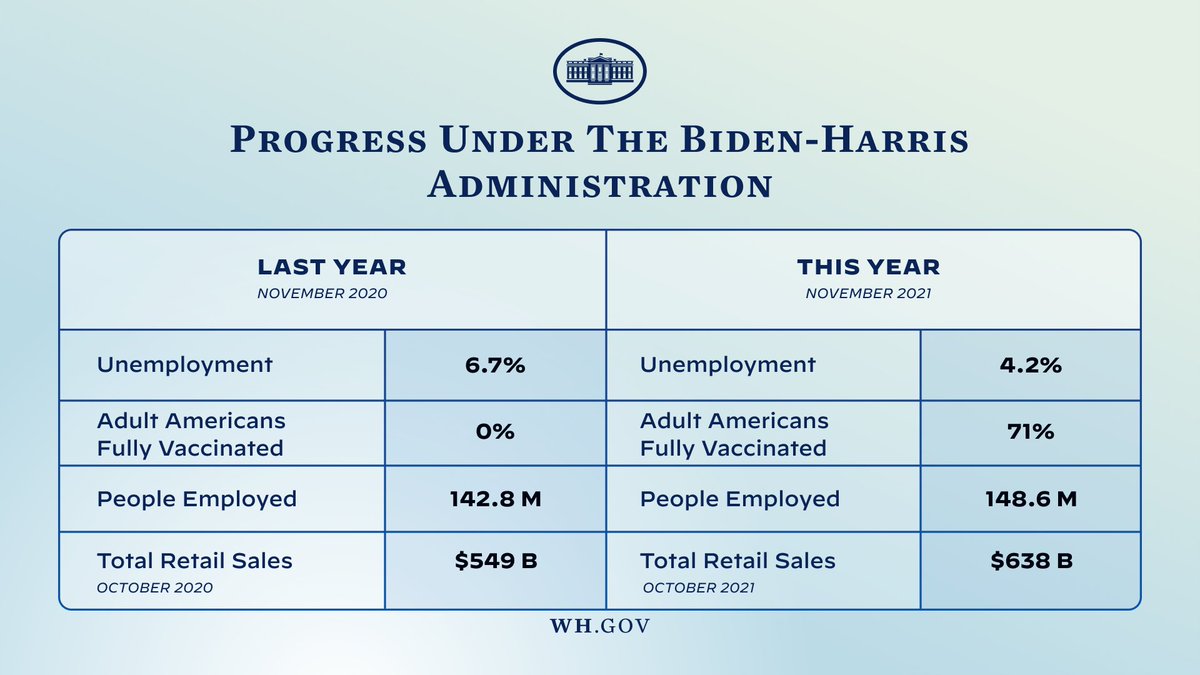 Unemployment is down to 4.2% three years faster than experts predicted. That’s the American Resc... 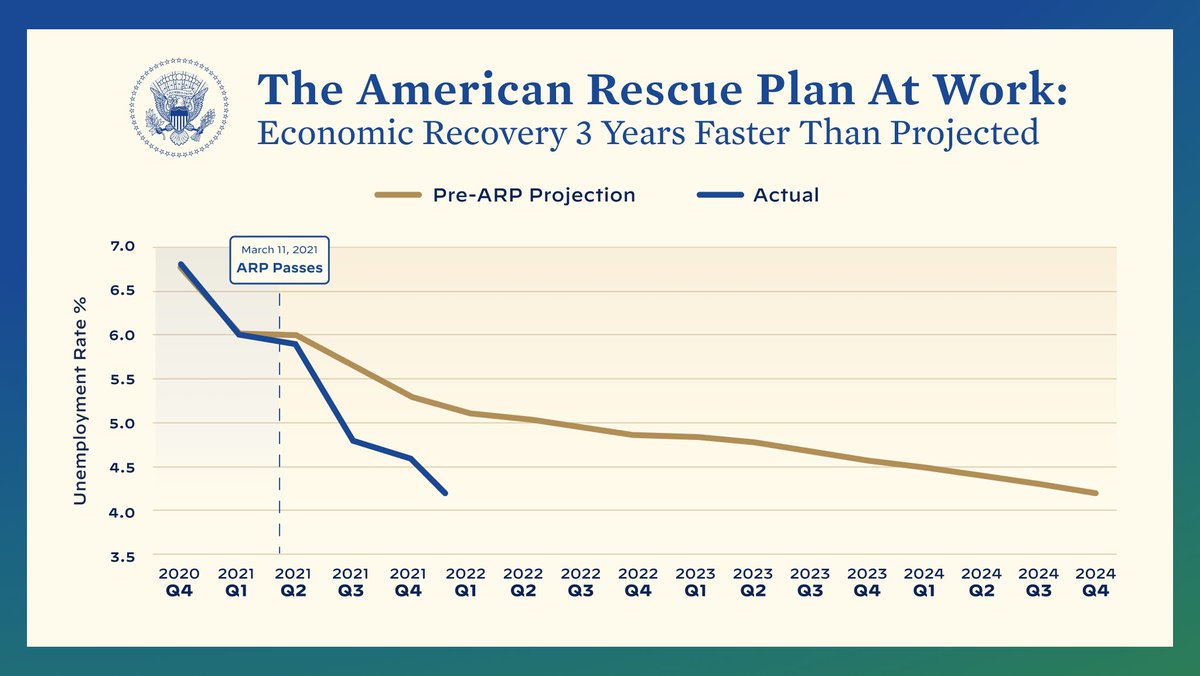 The Kamala Conundrum — Why Dems Are Stuck With Her

Abortion Is About Our Core National Values